In November of 2019, I started working on a collection of short fiction pieces focusing on relationships that I titled Conspiracies Against the Public. The original plan was to only release it physically, selling it at a wonderful "art book" store here in New York called Printed Matter, but with the COVID-19 pandemic it felt like it made the most sense to at least do some preliminary digital release. 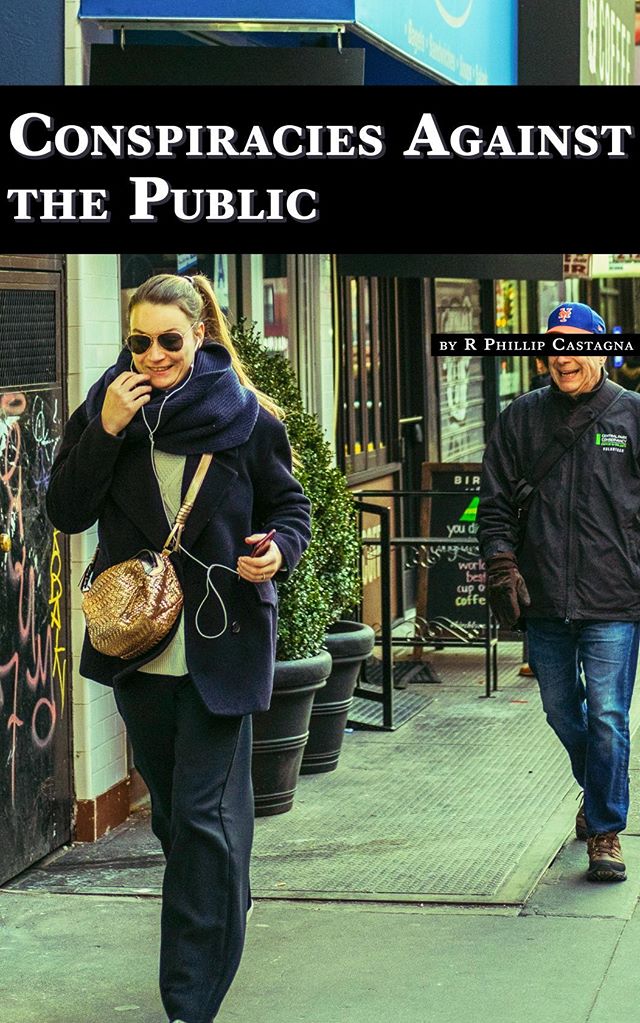 Well, I'm happy to say that Conspiracies Against the Public is now available for Kindle (and the assorted Kindle apps) through Amazon. What follows is the first of the dialogs in the collection, to give people a feel for what the book is all about.

I closed my eyes.

My head was resting on her stomach, and she was idly running her fingers through my hair. Her nails' soft sweep against my scalp sounded like the ocean. That moment: a world unto itself.

I smiled and opened my eyes.

“You can’t fuck your receptionist,” I said.

I grinned, exhaled; I think my eyes closed again.

“Because you’re a rising star at your company, and the power differential of a young executive fucking the office receptionist is never really ‘ok.’ Did no one ever take a second to, like, pull you aside, have some kind of talk with you about this stuff? Like, really?”

“No, look, it’s fine: I checked on it, and she’s not even one of our employees. We contract out for reception!”

“Ok, but look, see: it’s a really big red flag here that you’ve already checked that out, you know.”

I laughed and willed myself to stir, kissing her stomach before rolling over fully to look up at her.

She had been stroking my hair with her left hand, and still held a cigarette in her right. It was one of my cigarettes, of course—though I had told her she was more than welcome to them. Seeing her smoke felt... right. She was a captain of industry; smoking famously was part of the package.

“There’s some kind of gender-Realpolitik thing you've got going on here that I think you’re overly confident in. What’s this girl even like?”

“She’s, like… really Christian, actually," she said. She paused, thinking for a moment. "I was talking to her at one point, and she had her notebook out, and when I looked at it, it was all this writing about being happy Jesus was in her life and stuff…”

“What am I going to do with you,” I said. Even as I said it, though, it felt like something somebody had said to me once before.

She frowned and took a drag.

“You’re trying to corrupt this wonderful young woman under your employ! This lovely young woman who just wants to put in an honest day’s work and love Jesus! You’re supposed to be, like, her role model, not trying to bone her!”

"What kind of a question is that!"

I laughed again. I turned my head away, bowed down, kissed her stomach again, and followed that with more small kisses, meandering upwards along her body, mentally plotting a course towards her nipples. I moved back between her legs; she took another drag, and stubbed out her cigarette on the nightstand.

“When did this happen with you being bi, anyways? I wasn’t here for this development in your life,” I said. I punctuated my sentences with continued nips at her torso.

I paused and looked her in her eyes when I said that; I wanted to make sure she knew I meant it. She reached out, stroked my hair again, looking back into my eyes, pausing for a moment. Then she looked away again.

“Unfortunately, no. There’s a difference between being able to find someone of a certain gender attractive and actively wanting to have sex with people of that gender, y'know. A tragically large portion of the women I've met seem to be fine with the former but not the latter…"

She looked back at me while I meandered. She ran her hand through my hair again.

“Maybe I just want to ask you about it for the same reason I like talking to you about everything else,” I said. “It feels like we can get each other, right?”

She gave me a very specific look. Then she grabbed my head and pulled me up to kiss her. I closed my eyes once again.

It was a kiss that didn’t have a duration so much as it defined an epoch. There was a before, and there was an after, but the during was not something confined enough to this world to be measured.

I leaned my forehead against hers, and I knew I was smiling a bigger smile than was truly possible.

“I’m going to lose you again before I get to see you again, aren’t I?” I said.

“Of course,” she said. “What kind of a question is that?”

Read the whole thing on Kindle and the Kindle apps!